tl;dr As convenient and well-tended as walled gardens can be, they place frightning limitations on us. Also Save Couchy!

In the course of the Code for America fellowship, my teammates and I seize opportunities to kick out “quick win” projects. Our partner city of Lexington had a fantastic basketball year (Go Cats!) which means fan fervor drives people to set couches on fire. During our weekly checkin with the city we joked about a PSA website to dissuade couch burnings. With 30 hours before the next big game we pumped our fists in air and said “lets do this.”

It was a great experience thinking through the site. After some crazy 8’s we decided on a character named Couchy behind a @SaveCouchy twitter campaign. When you tweet to @SaveCouchy, it responds with a thank you message and your very own link to savecouchy.com/buds/YourTwitterHandle. Next thing you know you’re a dancing robot attempting to safeguard Couchy from the flames. An example is warranted: 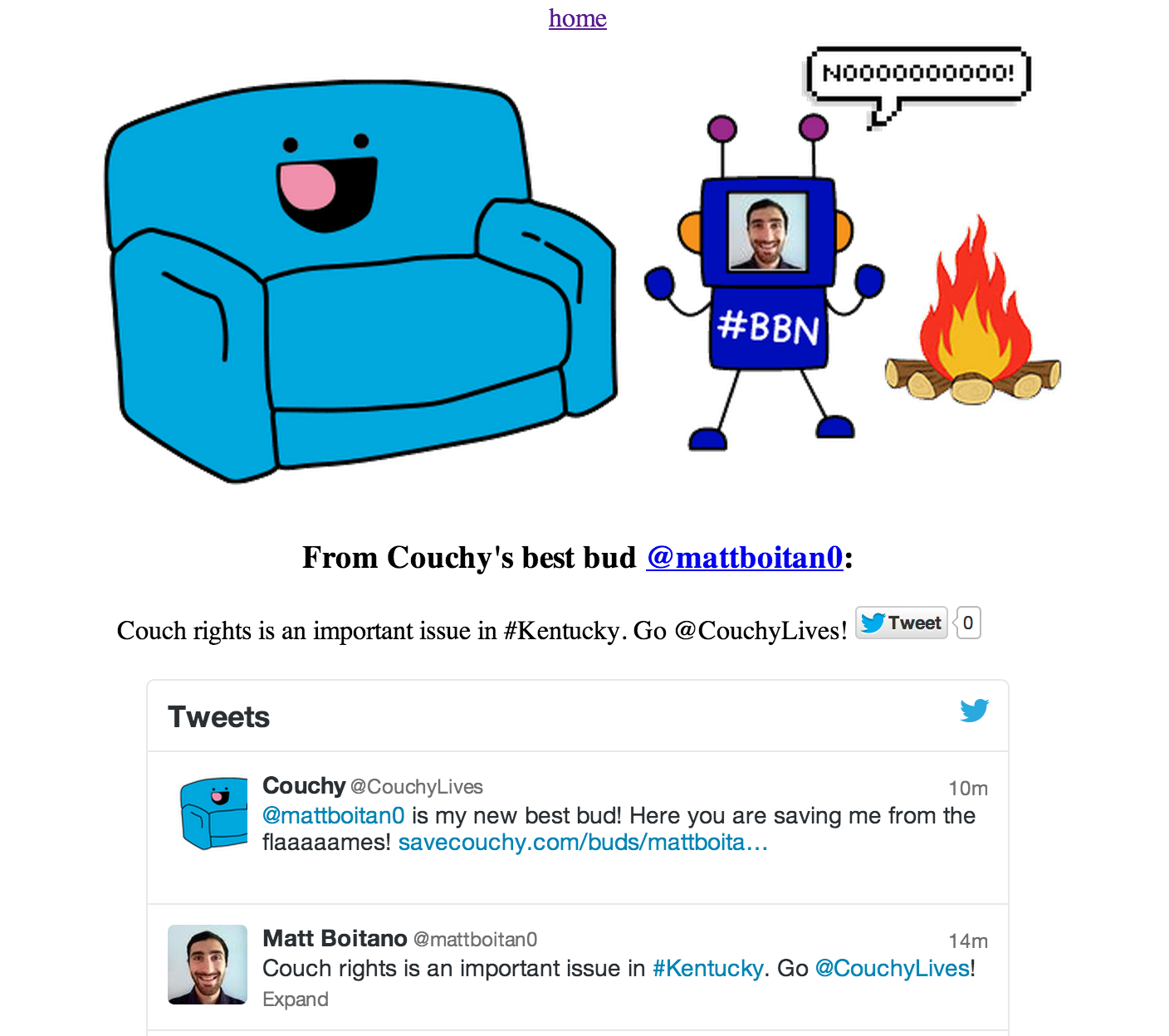 I’ll be honest. In development I mistakenly hit the twitter API and spammed 20 people on a popular hashtag before twitter cut me off. Account suspended. Doh! Twitter is reasonable and allows you to pinkie swear not to do it again and resume your account. Phew.

Twitter is clear-ish about when a bot can tweet at someone. Only if they solicit it by tweeting at you first. Ok cool, I followed those rules from that point on.

Fast forward to Final Four game time. Kentucky v. Wisconsin. Savecouchy.com went live and started following the rules and only replying to people who tweeted at it first. A few interaction later and it was suspended. I disabled all bot-replies, decided to run the account manually, and check the pinkie swear box to enable @SaveCounchy again. Before long it was disabled with no more pinkie swear option. Game over.

Hard to Make a Case for a Bot

So true. I mistakenly spammed some people and marred poor @SaveCouchy’s reputation. Nonetheless it hammered home the flaw in relying on systems that you have absolutely no control over. The web is about experimentation leading to interesting outcomes. In this case the experiment got called off by the medium.

Richard Stallman calls out Software as a Service for it’s lack of freedom dubbing it “Service as a Software Substitute.” Twitter wants to tend its walled garden for the sake of its users and shareholders. But it’s unfortunate that developers are completely at Twitter’s mercy whether or not we can build on their unique communication platform.

This issue shows how complicated these walled gardens are. IRC isn’t as nice to use as Twitter largely because the latter is a well-funded product with a centralized gameplan. But damn if it’s not free. Perhaps that’s the tradeoff. I’d like to think there’s a better way.

Good thing there are smart people out there who have put lots of thought into this exact question. Please do send those thoughts my way. On Twitter of course. @eeeschwartz.